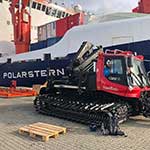 When you send your equipment off to spend a year drifting the Arctic Ocean on an ice floe, there can be no doubt whatsoever that it’s up to the challenge.

The HIAB X-HiDuo 108 E-4 truck-mounted crane is the intrepid explorer on the MOSAiC expedition, doing precisely that. Inspired by Norwegian researcher and explorer Fridtjof Nansen’s drift expedition taken 127 years ago, MOSAiC’s high-tech expedition is a scientific wonder. And HIAB is there.

The Arctic is the epicentre of global warming. Studying it is a vital and monumental endeavour – one requiring focus, function, performance, reliability and rugged endurance from its people and its equipment. Led by atmospheric scientist Markus Rex, and co-led by Klaus Dethloff and Matthew Shupe, MOSAiC (Multidisciplinary drifting Observatory for the Study of Arctic Climate). The Alfred Wegener Institute, Helmholtz Centre for Polar and Marine Research (AWI), spearheads the project.

A HIAB X-HiDuo 108 E-4 crane sits atop the German research icebreaker Polarstern, trapped in ice and at the mercy of tides and extreme weather Its goal? To study the Arctic to gain fundamental insights to understand global warming and climate change better. The vessel and crane set sail from Tromsø, Norway, in September 2019 for its epic year-long journey. MOSAiC involves hundreds of researchers from 20 countries. And only one HIAB.