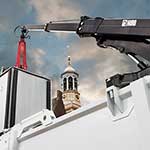 We’ve been talking trash ever since we got the new HIAB S-HiPRO 130 crane in stock.

The most innovative thing about it? The crane is mounted on the roof instead of behind the chassis. That saves four cubic metres of space – wasted space better used for added waste volume. And that adds up to more than 24,250 lbs. – about 12 extra bins on a single stop, or 25 percent additional waste pick up every run. You make fewer trips and save on fuel, emissions, labour costs, and wear and tear.

But that’s just the beginning. The S-HiPRO 130 is the answer to a sector that’s under a lot of pressure to manage costs and trash-talked over environmental concerns – it’s cheaper, safer, more efficient and environmentally friendly than anything else out there.

It’s also the first semi-automatic crane for this industry and has a smart control system to go with it. It’s fast. It’s accurate. It optimizes fuel consumption even more, and it can pick up on both sides of the truck – excellent on narrow city streets. In less than two minutes, the bin is empty, and you’re ready to move on to the next one. Save more time by throwing it into Quick-Park when the next stop is close.

The HIAB S-HiPRO 130 can expertly handle up to three bins without ever moving the truck. Crane Tip Control (CTC) is a standard feature that makes positioning the crane to pick up bins precise and error-free using single-lever control. Lift over 5,500 lb. within a horizontal reach of seven meters and six-metre lift vertical lift that steers clear of obstacles.

The only time the operator needs to take over is to attach the crane to the container when it needs to be picked up, emptied and closed. The rest is automatic all the way: unfold and fold; move from park to start; deploy the stabilizer legs; move the load to the hopper. And reset everything, so it’s ready to go again.

We think the HIAB S-HiPRO 130 is the kind of innovation that can make a real economic difference to municipalities across the country. It’s the kind of solution-based thinking for which HIAB is known. And it’s just one more reason why Atlas Polar is number one in Canada.