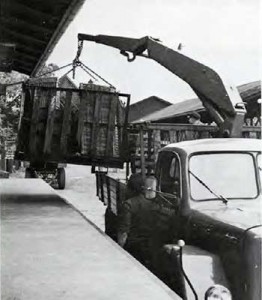 One of the great aspects of the HIAB crane is that it is always meeting and overcoming new challenges. Just look back to 1968 and you’ll see a prime example of this is the integration of the HIAB with the Vakumobil, which is a mobile stacker. You don’t see vacuum attachments in lumber yards today. This was originally introduced by Firma Ernst Lewecke in West Germany and utilized the HIAB 193 with four support legs and a special vacuum type lifting tackle.

HIAB has also made its presence known in the Fiji Islands. The equipment used there was able to meet the challenge of the rough roads by having the truck fitted with a third axle. This provided an extra benefit of a payload increase to 10 ½ tons. It meant the load weight could be easily transferred with the use of a pneumatic bogie lift as needed from this extra axle to the driving axle. Instead of requiring two men and an hour to discharge a ten ton load, it took about three minutes with the HIAB 173 Speedloader. The builder had easy access to his materials that are within reach, no matter whether he was working in the cellar or above ground level.

While there never seems to be any end to challenges the HIAB is going to meet, there also doesn’t seem to be an end to this crane’s longevity, durability and usefulness. In Sweden, this equipment was been dubbed as “elephants” because of their long lasting performance. One trucking company in Sweden started using their HIAB crane in 1957 and often used the crane six hours a day loading many types of heavy freight. The company even decided to have its eleven year old HIAB crane transferred to a brand new chassis.

What is just as impressive is the HIAB crane’s ability to problem solve in unique situations. For example, the Linke Firm in West Germany was faced with the challenge of transporting one long length of plastic piping where there was a concern that welded joints would be able to withstand the terrain it was going to be used in. The HIAB crane was instrumental in moving this 80 metre length of pipe to its destination with no mishaps.

Over the years, HIAB crane has come to the rescue where industrial jobs created unique challenges that would often require much man power and labor intensive activities. To read the complete article about how the HIAB crane was used by these two organizations, check out HIAB’s Method magazine, issue 10. The article is titled “Method Hoists.”