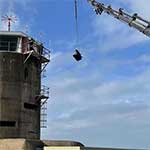 Innovative design ideas draw attention. Executing those ideas can mean ‘back to the drawing board’ without equally innovative solutions to do that – precisely what happened recently when Jersey Heritage had exciting new design and marketing ideas for their historic Radio Tower at Corbiére on the island of Jersey.

The iconic site, located on the southwest tip of Jersey, was built during the Second World War by German occupying forces. It features reinforced concrete with steel doors and a narrow spiral staircase – effectively a fortress.

In the 1970s, the States of Jersey Harbours and Airport Committee adapted the tower by adding a sixth-floor panoramic control room to monitor radio communication for vessels in the English Channel. The new design converted the building into a luxury self-contained holiday house, with a sophisticated lounge on the fifth floor. The unexpected challenge: how to install two contemporary sofas when the only way to get from out here to in there is through a narrow, eighty-year-old observation slot?

A crane was their only option. However, there were multiple factors to consider, the most important being the wind speed balanced against the sofas’ weight. The Jersey Radio Tower stands starkly on the rocky outcrop, buffeted by strong sea winds that could put the furnishings, equipment, maintenance team, and historic building at risk. Not just any crane would do.

Local contractor Fetch and Karrie came to the rescue with a 38-metre HIAB 858 truck-mounted crane. The HIAB 858 can operate at wind-speeds of 26 mph and had the stability, safety and precision control features to perform the high-tower feat.

The crane was perfect. The couches were perfect. The winds? Well, it took several weeks for those to drop to 26 mph to get the job done, but according to Michael Bee, Jersey Heritage commercial operations manager, “the end result was well worth the effort.”